The founder of Airstream, Wally Byam, traveled practically his entire life. When Wally was younger, his grandfather, a mule train conductor from Baker, Oregon, used to take Wally on excursions. He went on to become a Shepard in his teenage years, sleeping on a donkey cart with only two wheels. He packed food, water, kerosene, a camping stove, and a sleeping bag into this two-wheeled vehicle. One could say this was, in concept, the first Airstream Bambi; years before the idea would even come to fruition.

Wally kept this industrious passion throughout his life and built more trailers. They were built of plywood and masonite in the early years, as he began experimenting with adding amenities to turn them into travel trailers. He started by adding chemical toilets, gasoline stoves, pumps for water, and ice chests.

As he soldiered on, the trailers started to adopt a more aerodynamic as Wally started to employ aircraft construction procedures he learned in the service. These construction practices lessened wind resistance and make them more durable, increasing the strength-to-weight ratio of the travel trailers.

In 1934, Wally Byam introduced the name “Airstream” because his improved trailers cruised down the road “like a stream of air.” On January 17, 1936, the Airstream Trailer Co. introduced the “Clipper”, and an American legend was born.

The Clipper was truly revolutionary. At $1200, the Clipper was expensive, especially during the Depression years , yet the company could not build them fast enough to keep up with the orders that poured in. With its monocoque, riveted aluminum body, it had more in common with the aircraft of its day than with its predecessors. It could sleep four, thanks to its tubular steel-framed dinette which could convert to a bed, carried its own water supply, had an enclosed galley, and was fitted with electric lights throughout. The Clipper boasted of its advanced insulation and ventilation system, and even offered “air conditioning” that used dry ice.

But survival was soon threatened from without. On December , 1941, the Japanese attacked Pearl Harbor, and leisure travel and the materials necessary to build trailers became luxuries the country could not afford. Structural aluminum was classified as a critical war material, available only for the building of vital aircraft. Tires and gasoline became scarce and Wally Byam closed his doors. 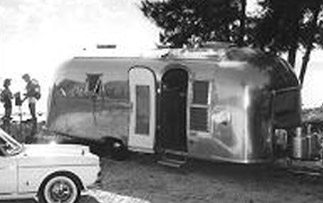 With the war’s end, the economy boomed and consumers began demanding more of the goods they had been deprived of. By 1948, Airstream Trailers, Inc., was helping to satisfy that demand at its new facility in Van Nuys, California. Wally had learned much about aluminum fabrication and design in the aircraft industry, and he was ready to begin applying that knowledge to his trailer concepts. The demand for Airstream trailers seemed to know no bounds, and it was soon obvious that Airstream had become a nationally known product. In July 1952, the lease was signed for a facility in Jackson Center, Ohio, to serve the eastern market. By August the first Ohio-made Airstream rolled off the production line, and the California factory was moved to larger facilities in Santa Fe Springs.

For the next ten years, Wally continued to improve and refine his products, and the company continued to prosper and grow. During this period, the company made the transition from direct, factory sales to a dealership network, providing even better service and responsiveness to its customers.

Then in 1962, Wally Byam passed away. Many companies would find it difficult to survive the loss of such a dynamic, visionary leader, but Wally’s technical and organizational skills had been absorbed by his successors, and the company continued to flourish.

By the early seventies, the popularity of motorhomes had grown by leaps and bounds. After several years of development, the first Airstream motorhomes were introduced in 1979.

In 1989, Airstream rolled out the all-new Land Yacht motorhome. In contrast to the Classic, this motorhome featured laminated fiberglass construction and had front and rear end caps so innovative that a patent was granted for them. The Land Yacht was an immediate success and is still the best-selling Airstream motorhome.

Airstream’s long tradition of design and manufacturing excellence led Money magazine to declare them one of “99 things that, yes, Americans make best.” Airstreams are found in both the Smithsonian Institution and the Henry Ford Museum. An Airstream trailer was selected by NASA to house the first astronauts back from the moon. Airstream motorhomes continue today to be an integral part of the space shuttle program. Airstreams have truly become an American Legend. Over 70% of all Airstreams ever built – including some built from the original five-dollar plans – are still rolling down the highways. Airstreams have survived millions of miles across some of the roughest roads in the world and Airstreamers have enjoyed the freedom to go where others only dream of traveling. As they relax in their climate-controlled coaches, enjoying a cold drink and eating dinner prepared in a microwave oven while watching ball games by satellite TV, Airstreamers are realizing a dream made possible by the vision and dedication of Wally Byam and the adventurous spirit of those early Airstream explorers. They are living the Airstream Way of Life!